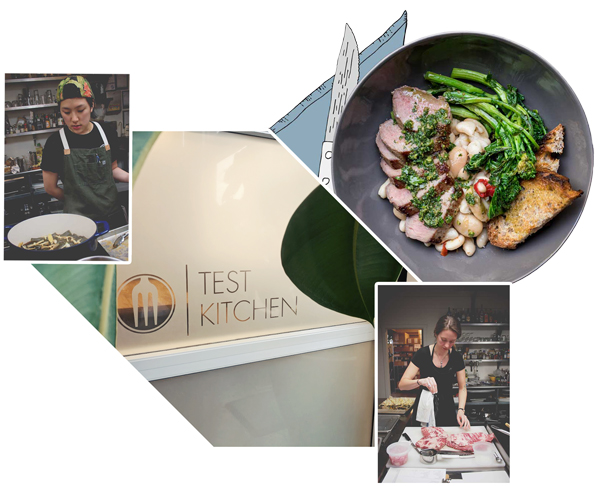 We’re looking for a new chef to join our team in our test kitchen for 1-2 days a month. You’ll bring a fresh perspective, expertise and creativity to help us find new ways to make our diverse catalog of proteins really shine.

Some test kitchen shoots are primarily focused on recipes where anywhere from 8-15 recipes are tested and plated dishes are photographed. Other test kitchens get much more technical. We dig in and get to know all the details of a single or select few cuts and explore the different ways they can be prepared and plated.

Here’s how it works:

• We pick the protein & send you a list of cuts.
• You send us your ideas. We don’t need formalized or final recipes up front, just enough to know what you’re thinking so we can put together a shopping list.
• We’ll go shopping and prep anything the day before, if needed.
• On shoot day, all you have to do is show up & cook!

Working in the test kitchen is well-orchestrated chaos. Typically 9-5, it’s an energetic and fun day. You’ll be interacting a lot with the photographer, helping to style dishes to make sure the proteins shine.

We’ve got cooks on staff and a test kitchen manager who will help with the flow, prep and clean up. Our shoot team includes a photographer, videographer, writer and project manager, so you don’t have to worry about recording or keeping track of anything. All you need to do is bring your ideas & be ready to cook.

If this sounds like something you’d love, let’s talk. Email me at: justin [at] marxfoods.com [dot] com. Tell me why you’re interested and what your availability is like.

We look forward to cooking with you soon!

We’ve got some really tasty additions to the stores for you today – check them out!

Iberico Pork is considered amongst the world’s finest pork.  You’ve probably heard of Iberico ham, but it turns out the rest of the hog is also incredibly delicious.  “Chefs are telling us it’s the best pork they’ve ever worked with” kinda’ delicious.

If you want to party like Spaniards do, go for the secreto or pluma (end loin), season simply with salt & pepper, then sear or grill it to an internal temperature of 125°F (more rare than Americans normally would).*

You’ll be amazed by how succulent and tasty it is.

We’re not talking about run of the mill canned tuna here.  Portugal and Spain both produce some of the world’s finest tinned fish in a tradition referred to as conservas.  We’ve tried a bunch over the years, and the ones we finally decided to carry are by far the best.

They’re so good that you can simply serve them with crusty bread, maybe some leafy greens or a lentil salad, and you’ve got instant high-class tapas.  Yum!

You’ve probably never heard of coffee flour before, but that’s about to change.  This exciting new food represents the cutting edge of sustainable super foods & is already starting to garner a lot of press & praise.

Coffee Flour is made from the fruit that grows around coffee beans.  It has a fruity flavor, a little caffeine, and is naturally very nutritious & also gluten free.  It can be used in baked goods or as a seasoning.

Our new Paella Kit contains everything you need to make the delicious Spanish one-pot classic, besides a pan and some fresh meats (we recommend chicken, rabbit), seafood, or vegetables.

We’ve picked out just the right rice, the right base broths, and the right pimenton (also new).  All of which were made in Spain for real Spaniards, then imported for you. (we know a guy)

What are you waiting for?  It’s paella time!

The latest addition in our epic quest to bring you all the mushrooms worth eating, saffron milk cap mushrooms are earthy & smoky with a slightly crunchy texture after you rehydrate them.

* We’re obligated to mention that the USDA says you should always cook pork to an internal temperature of 145°F with a 3 minute rest for safety.