Ryan, our photographer/graphic designer, took a trip to Olsen Farms, growers of our heirloom potatoes, to document the early stages of the 2012 harvest. 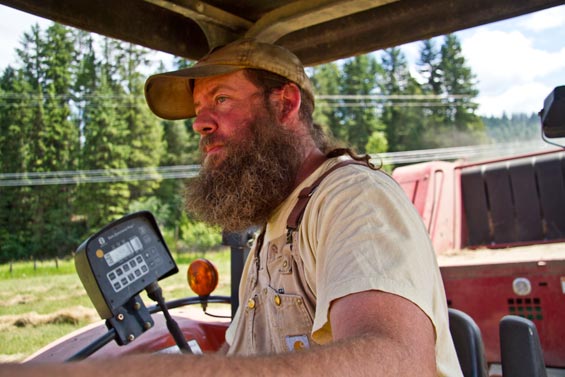 The Olsens’ potato farm starts about

five miles outside Colville, a small community of about 4,700 people in eastern Washington State. In this gorgeous, sparsely-populated farmland, they grow over 20 different varieties of heirloom potatoes across 23 acres using dry land farming techniques.

Here’s a shot of one of their potato fields. 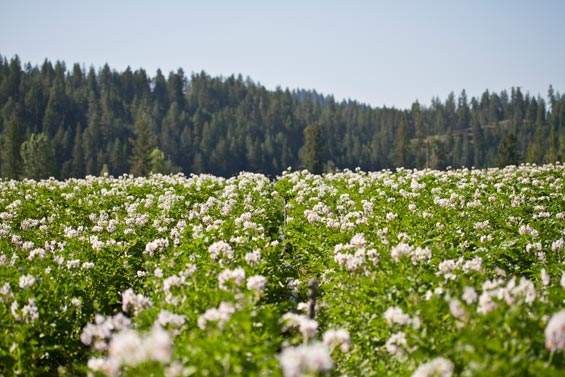 One fun fact I discovered while I was there: with heirloom potatoes, the color of their flowers often correspond to the color of the potatoes that variety produces. These flowers are probably on one of our purple varieties: 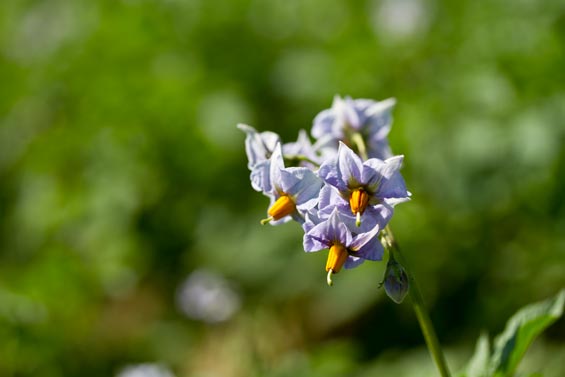 They plant their potatoes in early May, and the very first ones start coming out of the ground in July. The workers harvest from early morning until noon, so they can get a bunch of potatoes out of the ground before the hot mid-day sun hits. 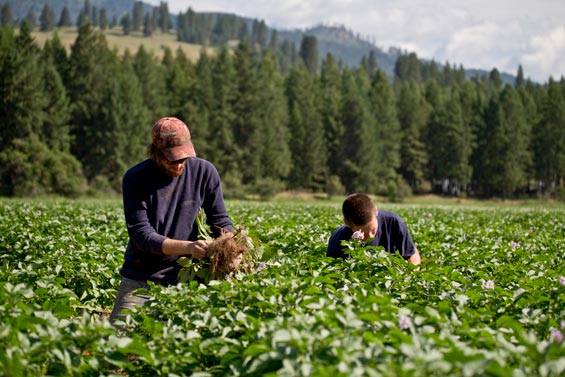 When we visited, they were in the middle of the early harvest. At this point in the season, the potatoes are very delicate and have to be harvested by hand, because their skins are still very thin.

Brent was selling them to fine restaurants and at 17 farmers’ markets in Washington, but they were still too fragile to ship across the country for our customers. We’ll have potatoes to ship any day now, since it is late enough in the harvest that the potatoes’ skins have begun to set.

Believe it or not, these potatoes really did just come out of the ground. Dry land potatoes are naturally very clean. 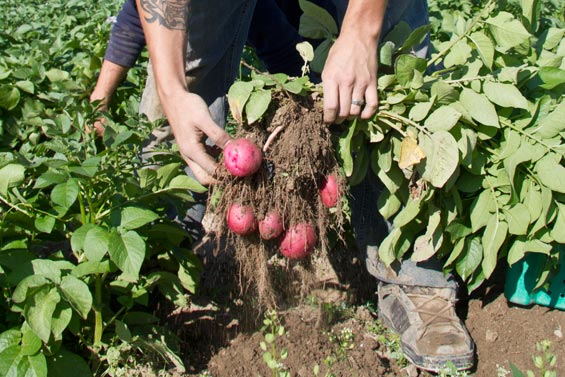 But they are still washed. 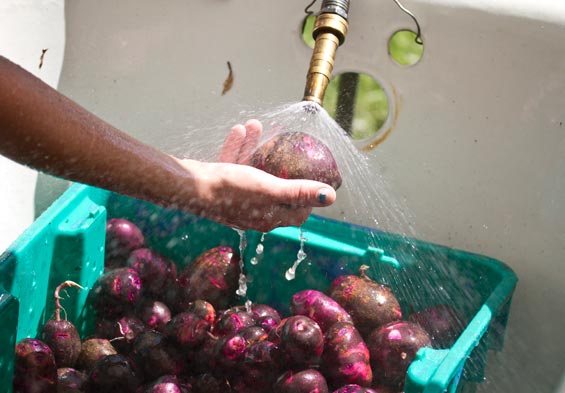 While their skins are so thin they need to be washed and sorted by hand. Here’s another look at their washing & sorting tables in the fields: 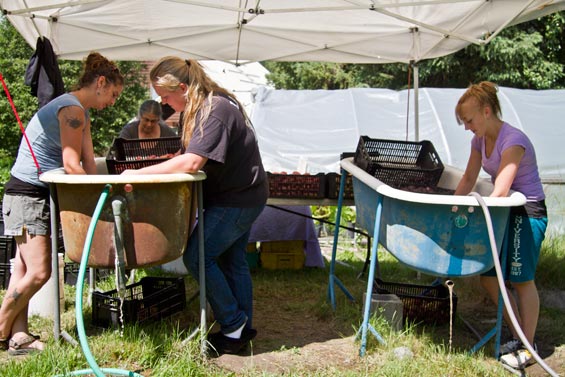 As the season progresses and the skins thicken, they will be harvested and washed by machine. But they’ll still be hand sorted to ensure quality. 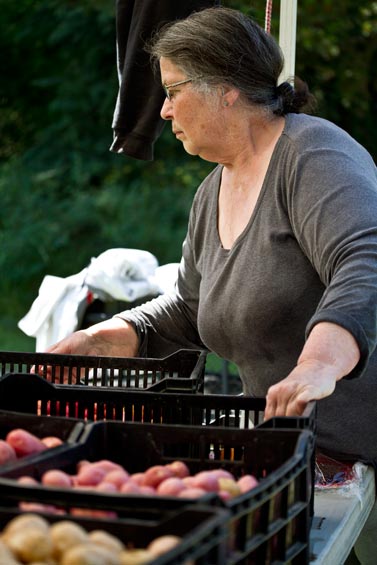 Once out of the ground, the potatoes are stored in a special electronically controlled storage room that keeps air moving and the temperature just right to ensure quality. 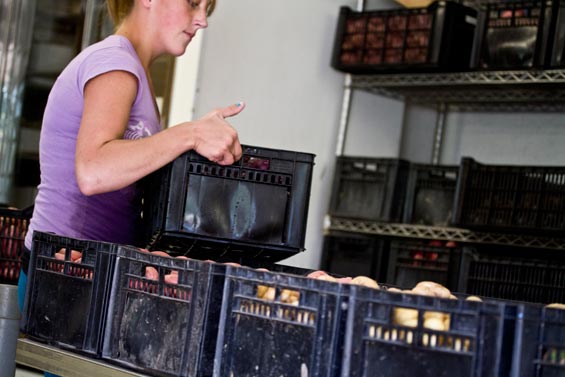 “The Meat and Potatoes Guy”

Olsen Farms isn’t just in the specialty potato business. You’ve heard the expression “meat and potatoes”? Well that’s the driving vision behind the farm – Brent wants to be “the meat and potatoes guy.”

In addition to potatoes, the Olsens also grow huge amounts of hay. They use this hay to feed 100 head of cattle that live on the farm, and sell the leftover bales. The cattle are rotated through the hay fields to replenish nutrients and promote growth (the cattle aerate and fertilize the fields). 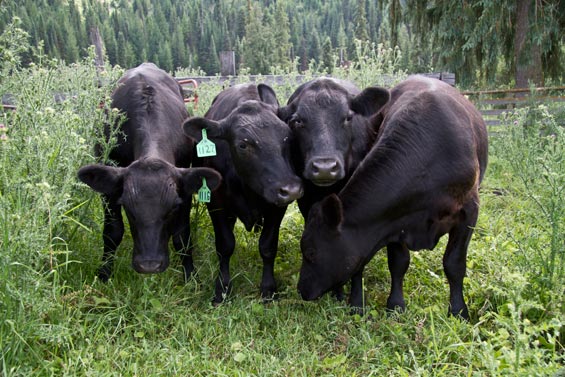 Any potatoes that don’t pass muster during the sorting process aren’t wasted. Instead they are fed to the cattle as a special treat. The herd is trained to come when they hear the sound of potatoes shaking in buckets, allowing the farm workers to easily lead them around the farm. 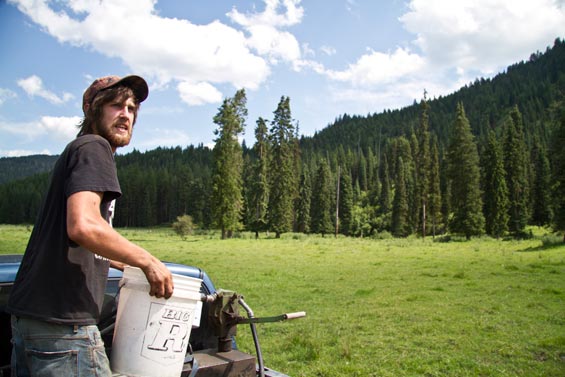 And the result – the herd follows the truck into the next field. 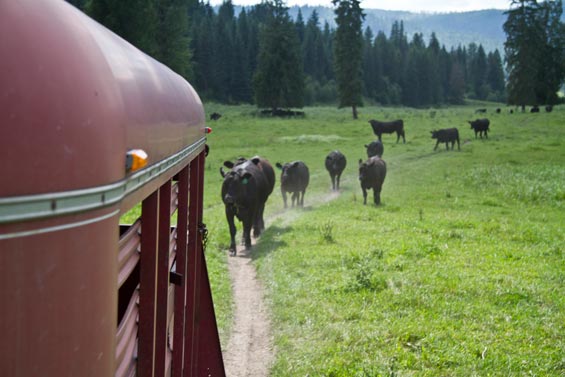 Here’s Brent distributing some more taters for the cattle: 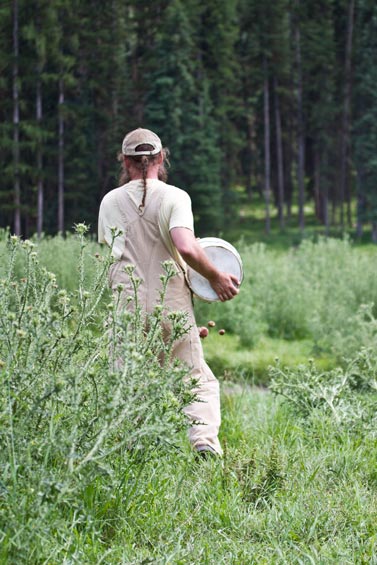 Olsen Farms will start shipping Marx Foods orders direct from the farm to you in late August. Of all their special varieties, the All Blue potatoes and Purple Majesty potatoes tend to sell the best, but each variety has a reason to recommend it.

Check out our heirloom potatoes category or our quick heirloom potato guide to see all the colors and varieties we offer, or browse our potato recipe collection for a bunch of great ways to use them.